A Crucible of Creativity exhibition at Barnstaple museum 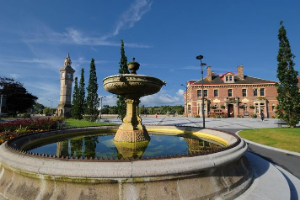 An exhibition telling the story of the Barnstaple School of Art during the Arts and Crafts period opened at the weekend (Saturday 2 April) at the Museum of Barnstaple and North Devon.

"A Crucible of Creativity" is curated by Naomi Ayre, Librarian of the North Devon Athenaeum. It shines a light on the school which, during the 19th and early 20th centuries, trained many significant artists and makers in the district.

The exhibition is a Creative North Devon project and includes images, original documents and examples of work made by students and teachers at the School of Art, including the internationally significant architect and teacher William Richard Lethaby.

Museum Manager, Alison Mills says: "We’re delighted that Naomi has put together this fascinating exhibition, combining objects form the museum, Athenaeum and Record Office collections. It is the opening part of our major project about the weaver and dyer Ethel Mairet, which forms the bulk of our programme this year."

Librarian of the North Devon Atheneum, Naomi Ayre says: "Bringing together items from the collections of the Museum of Barnstaple, South West Heritage Trust and North Devon Athenaeum, we're telling the compelling story of the creation of a crucible of creativity within Barnstaple and North Devon, which not only created but also attracted some of the creative Influencers of their day; influences which have inspired generations and can still be seen today in North Devon and beyond."

Entry to "A Crucible of Creativity" is free. More information can be found on the museum website. Please email museum@northdevon.gov.uk with any queries.