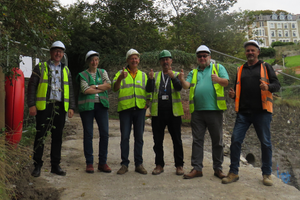 Ilfracombe is one step closer to having its own watersports centre, as the construction project at Larkstone is showing signs of progress.

Latest developments include foundations for the new seawall and the removal of the old canoe store. Pre-cast blocks for the sea wall will arrive soon and be installed in later in October.

Lead Member for Economic Development and Strategic Planning Policy, Councillor Malcolm Prowse, says "I am very impressed with how the water sports centre construction is coming along. Pearce Construction are doing a fantastic job. The council hopes that this centre will bring more tourism, which in turn will bring more money and more jobs to the town.

"None of this would be possible without funding for the project which came from the Government's Getting Building Fund after a bid by The Heart of the South West Local Enterprise Partnership (LEP) and we are extremely grateful to them for their help in getting this project off the ground."

Lead Member for the Environment at North Devon Council, Councillor Netti Pearson, says: "I was particularly keen to find out how much work is being done to mitigate the impact of the works on the environment. I was pleased to hear that a specialist consultant was brought in during the design stage to ensure that there was an environmental management plan in place.

"Pearce Construction have built nooks and crannies into the sea wall to encourage marine plants to take hold and grow. They are also building crab houses and man made rockpools for sea creatures to live in. I was also very happy to find out that most of the materials that need to be removed will either be reused in the new build, or have been sent away for recycling, with very little going to landfill."

Karl Tucker, chair of Heart of the SW LEP, said: “It’s fantastic to see construction progressing well on this project and the consideration that is being placed on the environmental impact of the work. Ilfracombe Watersports Centre is going to be a great asset for the town and wider area, giving residents and visitors the chance to get out and enjoy the water. We are pleased to have been able to support it with just over £1.5m from the LEP’s Getting Building Fund."

To mitigate the impact of the building on its surroundings, once it is finished, areas around the site will be identified for bird nesting, bat boxes and natural homes for insects.