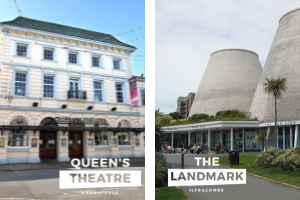 North Devon's theatres are celebrating being able to welcome audiences again with a packed schedule of comedy, drama, music and community performances.

On Sunday 1 August, multi-award-winning comedian Rhod Gilbert welcomed a sold out audience of theatregoers back into the auditorium of the Queen's Theatre, Barnstaple with his hilarious stage tour – a sight that has been missing from North Devon's theatres for most of 2020 and 2021.

The Landmark theatre in Ilfracombe has also reopened with a wonderful performance of Disney’s The Little Mermaid Jr, presented by Make The Move Rising Stars, kicking off a jam packed Summer Season.

Measures have been put in place to promote public health, as well as peace of mind, for audiences. These include:

Leader of North Devon Council, Councillor David Worden says: "To hear that the first show to be held at the Queen's Theatre was a sell out is fantastic news. We are so lucky to have these two theatres in North Devon giving us high quality live shows, but they have suffered more than most due to the pandemic. I would like to urge both residents and tourists alike to please support our local theatres as they make a comeback after such a difficult period."

Marcus Olverman, Box Office Manager says "The laughs from within the Queen’s auditorium at the sold-out performance was a joy to be heard and just what the theatres have been waiting for! Patrons had a great night, everyone was happy to follow the Covid safety guidelines and enjoyed being able to watch a live show again.”

Theatre Manager Mark Farley says: “The Management team of both venues are very conscious of the continuing effects of Covid. We want to reassure our patrons that their health, and that of our staff, and the cast and crew of visiting shows, is a priority. We are taking steps to reduce the potential spread of Covid-19, while doing our best to provide a service that celebrates the arts and community connections."

The theatre programme now switches to The Landmark, Ilfracombe, as the Summer Season continues with hysterical farce Ding Dong, music from North Devon Sinfonia, Studio Theatre Ilfracombe’s performance of Outside Edge, and wraps up with Agatha Christie’s detective thriller Spider’s Web from 10-14 August. They also have the acclaimed singer, Elkie Brookes, Live and Unplugged on Wednesday 18 August.

Tickets can be booked at queenstheatre-barnstaple.com, or by calling the Box Office on 01271 316523.