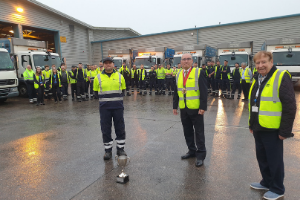 The Waste and Recycling Team at North Devon Council has proudly received the Environment Cup from Barnstaple's town mayor in recognition of their efforts with the community's environment.

Barnstaple Town Mayor, Councillor Alan Rennles, visited the team at Brynsworthy Environment Centre today (8 September, 2020) to present the award. The award is presented by the mayor to a person or group in the community which they feel deserves recognition for their efforts. The team was praised for their commitment and efforts over the year, particularly during the Covid-19 outbreak.

The team's key role in looking after the community and managing household waste and recycling during the challenging times was highlighted.

Lead Member for the Environment at North Devon Council, Councillor Netti Pearson, says: "I'm delighted for the team that their hard work and dedication has resulted in this award. They should be particularly proud of the efforts they made to keep the service running through recent months and the Covid-19 outbreak."

Barnstaple Town Mayor, Councillor Alan Rennles, says: "It's been a real privilege to come along and meet the team today (8 September, 2020) and present them with the Environment Cup in recognition for all their hard work. The last few months have been very different for all of us but the team have carried on getting the job done, looking after North Devon."

The team were notified of the award in May when a presentation would usually be made as part of the Mayor Making Ceremony at Barnstaple's Guildhall. This year's ceremony was cancelled due to the Covid-19 outbreak and individual award presentations arranged instead.

The photo shows (left to right) Rod Davies accepting the cup on behalf of the Waste and Recycling Team in memoriam of his best friend and cab mate Keith Metcalfe who sadly passed away in the early summer, Barnstaple Mayor, Councillor Alan Rennles and North Devon Council Leader, Councillor David Worden.