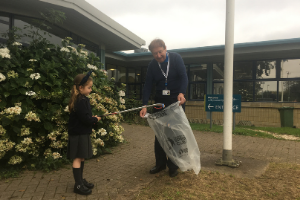 In support of the campaign, Council Leader, Councillor David Worden, presented five year old local resident Darcie Stoner with her very own set of litter picking tongs in recognition of her efforts collecting litter from across the district. Darcie carries out litter picks at least once a fortnight and is a keen participant in local beach cleans, sharing her adventures with the council on social media.

The Great British September Clean nationwide annual litter picking campaign ran between 11 - 27 September. The council encouraged residents to organise a private group clean-up or pledge to do their own individual litter pick and provided equipment and bags to groups within the district who took up the call for action earlier in the month.

Leader of North Devon Council, Councillor David Worden, says: "It's encouraging to see our residents and groups taking up the challenge to help keep North Devon clean. Meeting Darcie and listening to how keen and enthusiastic she is in carrying out her own litter picks with the support of her family, shows just how important our environment is to our younger generations. Let's keep this momentum going and keep our beautiful district clean and tidy."

The national event coincides with the council's ongoing 'Clear Messages' campaign, which aims to combat environmental offences such as littering and flytipping and asks the North Devon community to share information about litterers in order to 'challenge it, report it, change it'.

Members of the council's Waste and Recycling Team have also been busy sweeping the roads and streets of the district, keeping on top of their usual duties and any additional littering issues brought to their attention.

Environmental offences such as flytipping or littering can be reported to the council online at www.northdevon.gov.uk/environment or by calling 01271 388870.

Residents or groups who have been inspired by the campaign and wish to borrow equipment or arrange for a collection of litter should contact the council in advance by email to customerservices@northdevon.gov.uk or phone the Customer Services team on 01271 374776.