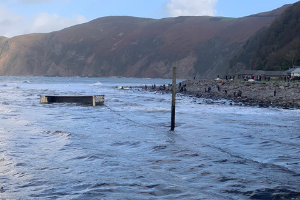 A container that washed ashore on Lynmouth beach yesterday (Tuesday 27 October) has now been recovered.

The container was one of eleven 40-foot long containers that were lost from a cargo ship in the Bristol Channel on Tuesday 20 October. Of the eleven that were initially reported, six were empty and five contained non-hazardous cargoes. Containers have also washed up on beaches in Torridge and Wales and others may have sunk as not all have been seen during HM Coastguard's coordinated searches.

The container that washed up in Lynmouth had broken open with some insulation foam from the container washing up on the shoreline. When the container was spotted, authorities including Devon and Cornwall Police were notified and specialist marine operations company Keynvor Morlift Ltd was contracted to recover the container and its contents, assisted by a number of volunteers.

North Devon Council's Lead Member for Environment, Councillor Netti Pearson says: “It is a real concern when spills occur in our waters so we are pleased that this container has been successfully recovered from Lynmouth beach. We would like to ask our residents to assist us by being vigilant when near the local coastline. If another container - or its contents - is spotted on a North Devon beach, please contact authorities as soon as possible so that arrangements can be put in place for its safe retrieval."

Sightings of the missing containers should be reported to Falmouth Coastguard Operations Centre by email cgoc.falmouth@mcga.gov.ukor phone 01326 317575.