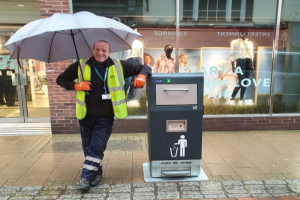 A smart bin is being trialled in North Devon in a bid to reduce littering in the district.

Barnstaple High Street is the first location for the solar powered bin, which can take up to seven times more rubbish than a standard bin as the waste gets crushed and compacted several times a day, using only energy from the sun.

Even when it's not a sunny day, infrared technology means that energy can be collected without direct sunlight so the bin will still work. The units are sealed to stop birds and vermin getting in and can be opened using a foot pedal or by the handle on the pull down door. When the bin is full a sensor sends out an email, so the bin can be emptied before it overflows.

North Devon Council’s Lead Member for Environment, Councillor Netti Pearson says: "This trial is at a fairly low level with just one bin at present, but we will be monitoring its progress to see what difference it makes. We will place the bin in busy areas, and position it in tourist hotspots over Easter, to see how well it works.

"Smart bins bring many benefits, such as lower carbon emissions as they need to be emptied less often, so refuse collection trucks make fewer journeys. The advantages are clear – they cut down on littering, save time and money on collections, deter vermin and best of all they use renewable solar energy."

Local ward member for Barnstaple Centre, Councillor Robbie Mack, says: “Barnstaple High Street gets a lot of traffic - and therefore a lot of rubbish! Currently, the bins here are emptied daily. A bin like this should mean less risk of overflowing and littering in the High Street, and we all want to see less litter. I’ll be interested to see the results of the trial.”

The bin will also be trialled in other locations in North Devon during the six week trial, and if it proves successful more of them may be rolled out across the district.