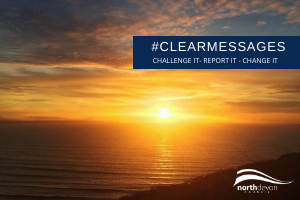 Two years since the launch of its ‘Clear Messages’ campaign, North Devon Council is continuing the fight against environmental crimes and looking back on its successes to date.

In 2018 the council’s environmental protection team launched a campaign to spread awareness of environmental issues and explain to North Devon residents how they can help to keep North Devon clear of litter, flytipping and dog mess. The campaign involved a mix of local press and social media activity, leaflets and posters, as well as ‘on the beat’ advice, events and partnership working with town and parish councils and community groups.

The hard work continued throughout 2019, when the council dealt with 653 reports of fly-tipping, 264 abandoned vehicles, 20 littering complaints and 84 dog fouling issues. The environmental protection team successfully prosecuted three people for a mixture of offences (one each for dog fouling, flytipping and abandonment of a vehicle) and issued 31 fixed penalty notices (eight for dog fouling, 11 for littering, four for littering from a vehicle, one for abandonment of a vehicle, two for not having a transfer note or trade waste agreement and five for flytipping).

As well as tackling environmental crimes, the council’s environmental wardens also pick up lost dogs and reunite them with their owners where possible. Last year they looked after 83 lost dogs, 18 of these weren’t chipped and with many that were chipped the details were inaccurate. Microchipping your dog and keeping the details up to date (when you move house, change telephone number or they change ownership) is a legal responsibility and you can be fined up to £500 for failing to do so. Inspired by the success of the council's social media accounts in helping to reunite dogs with their owners, the wardens set up their own Twitter account @NDCWardens. The team was also awarded Community Safety Accreditation in March 2019, which means they now have more powers and offer greater support to community partnerships.

Thanks to their high profile campaign, environmental wardens Ray Jones and Alan Kyle were asked to feature in a Channel 5 documentary in July 2019. 'Life of Grime' followed the wardens as they dealt with two abandoned cars that were later crushed and tracked down the offender of a dog fouling incident and issued them with a fine.

The campaign also succeeded in encouraging residents to get involved by challenging and reporting such incidents to the council. As a result:

As a result of these successes, the Clear Messages campaign was also shortlisted for a national award in the ‘Environmental Services’ category. The awards ceremony will take place in London later this month.

North Devon Council's Lead Member for Environment, Netti Pearson, says: “Our officers put a huge amount of energy and time into making their work visible to the public and for very good reason; there are still people who feel that littering, flytipping and dog fouling are someone else's problem and we need to do what we can to change this mentality.  Our officers can’t look after North Devon alone – reporting these incidents to us is the only way we can really tackle the problem head-on, so please help by reporting environmental offences to us online so we can investigate. We plan to build on the successes of the last two years so keep an eye on the papers and social media and get involved by spreading the 'Clear Messages' of the council’s campaign – join us in the fight against environmental crimes and #stopmessingaround.”

If you have an environmental issue in your area or would like to report flytipping, littering, dog fouling or abandoned vehicles, get in touch with North Devon Council online at www.northdevon.gov.uk/environment or call 01271 388870.