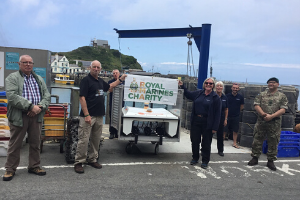 The new launch system for Ilfracombe Harbour's very own waste shark, 'Sharkie', is getting closer to completion thanks to the arrival of a new shark cage and a lot of hard work.

The custom built shark cage, along with a trolley and a waterproof cover have been presented to Ilfracombe Harbour Staff and The Shark Ambassadors from Commando Logistic Regiment, Royal Marines Chivenor and the North Devon branch of the Royal Marine Association. 'Sharkie' is the nickname given to the aquatic drone, designed to clear unwanted debris such as plastics and oil from waterways and a much loved resident of Ilfracombe Harbour. The items will be used to transport it from its home to the new bespoke launch system once complete and installed at the harbour.

The new launch system for 'Sharkie' is currently being  set up specifically for Ilfracombe's tidal range by harbour staff and The Shark Ambassadors. The Shark Ambassadors are local residents who have volunteered their time to help with the set up of the system and operating 'Sharkie' and also the organising of other volunteers who will be trained up when the system is complete. Once complete and COVID-19 restrictions ease, it will mean 'Sharkie' can be launched on a more regular basis in the harbour.

Lead Member for the Environment at North Devon Council, Councillor Netti Pearson, says: "'Sharkie' is a real asset to Ilfracombe and as a resident of the town I look forward to seeing it back in action. I was at the launch last year, it is a novel way to raise awareness of the amount of plastic waste that washes up in the harbour and is a useful tool for measuring and reducing other pollutants in the water. The new equipment will make it easier to launch ‘Sharkie’, and house it safely, so we will be able to see it in action more often."

Ilfracombe Harbour Master, Georgina Carlo-Paat, says: "I would like to express my deepest gratitude to the Commando Logistic Regiment, Royal Marines Chivenor and the North Devon branch of the Royal Marine Association for all their hard work developing these items for us to house 'Sharkie', the resulting cage, trolley and cover are brilliant and have moved the completion of the project a huge step closer."

Chairman of the Royal Marines Association in North Devon, John Peel, says: "The communities of Ilfracombe and North Devon are very appreciative of the Armed Forces and the work they do and particularly those stationed at RMB Chivenor and the base at Instow.  As chairman, acknowledging the responsibilities we have to our local veterans, it is great to have such a good relationship within the community and we are always very well received when out and about.

"It is a great pleasure to able to support projects when they come around and the 'Sharkie' project has been yet again an opportunity to collaborate in a positive way and continue to enhance relationships.  We look forward to being able to come back to Ilfracombe for future events."

'Sharkie' was first launched in Ilfracombe Harbour in March 2019 and has been stored away during the winter months. This recent project has been funded with a grant from the AONB along with other local contributors. Once launched, the drone has the capabilities to gather air and water quality data, and filter chemicals out of the water such as oil, arsenic, and heavy metals through filtering pads.

'Sharkie' is controlled by harbour staff alongside the Shark Ambassadors and all waste recovered from it will be deposited in the Ocean Recovery Project bins at Ilfracombe Harbour, then collected by North Devon Council for sorting.  Ocean Recovery will then recycle the separated plastic waste into pellets, which can in turn be made into kayaks and composite flooring.