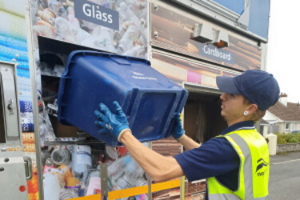 All households in North Devon will soon receive a new, blue recycling box so they can separate their glass from the rest of their recycling.

It comes after a successful trial of the boxes in Yelland and hugely positive support from the wider population to help our recycling crews by separating their glass throughout the pandemic.

The trial in Yelland involved around 800 homes and the outcomes were:

To help with short staffing throughout lockdown, the council asked residents to separate glass into any suitable containers they had to help speed up collections. The crews were overwhelmed by the public support for this but have reported that they had problems tipping the glass from a lot of the containers put out. By giving everyone a proper recycling box, tipping the glass into the recycling trucks is much easier and safer.

Lead Member for The Environment Cllr Netti Pearson says: "We've been overwhelmed both by the positive response in the trial area and the immense support for our staff we've had from everyone across North Devon throughout the pandemic. Separating glass has made a huge difference to our rounds and has made us more efficient which will really help us in the future as North Devon grows and demands on our services increase. Thank you everyone for getting behind this change."

The new boxes will be delivered throughout August and September. Once the box has been delivered, people can start using them straight away at their next collection. If people already have a second NDC-issued recycling box, they can opt out of receiving the blue box on the council's website, or by calling Customer Services on 01271 374776 which must be done before 26 July.