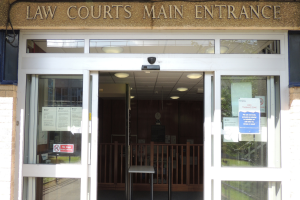 Four local men have been fined over £850 between them for committing anti-social behaviour offences in Barnstaple and Ilfracombe town centres.

Each were prosecuted at Barnstaple Magistrates Court after they were seen to have been either drinking alcohol in public places or publicly urinating within the boundary of a Public Spaces Protection Order (PSPO).

The PSPO which is in place in Barnstaple and Ilfracombe town centres aims to target antisocial behaviours such as street drinking, drug use, public urination and aggressive begging (using intimidating language or actions, or begging within five metres of a pay point or cash machine).

On Monday 7 March, magistrates heard that a man was seen drinking alcohol out of a can in Bear Street, Barnstaple in December last year. Despite being warned he was committing an offence and being asked to hand over the can, he failed to comply.

A second hearing took place on Monday 16 May for two of the men who were seen publicly urinating by benches near the war memorial at St Brannocks Road, Ilfracombe on Wednesday 16 March. After being made aware that they were breaching a PSPO, the men refused to co-operate.

At the third hearing on Monday 16 May, magistrates heard that another male was found consuming alcohol in Tuly Street, Barnstaple on Wednesday 23 March. Despite being told that he was breaching the PSPO, the man failed to comply.

Leader of North Devon Council, Councillor David Worden, says: "We are working hard in partnership with Devon and Cornwall Police and other agencies to ensure North Devon a great place in which to live, work and shop. Residents and visitors shouldn’t have to put up with anti -social behaviour which is committed by the minority. These prosecutions make it very clear to everyone that we take the PSPO terms very seriously and will prosecute anyone who decides to breach them."

A person who fails to comply with the PSPO requirement has committed an offence under section 59 of the Anti-Social Behaviour, Crime and Policing Act 2014.