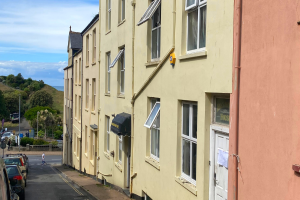 A multiple occupancy property in Ilfracombe has been shut down by North Devon Council and Devon and Cornwall Police following concerns about anti-social behaviour, general disorder and poor housing conditions.

Working in partnership with the Police, North Devon Council were successful in achieving a closure order from the magistrates' court after securing evidence of anti-social behaviour and licensing breaches at the address.

A three-month closure order was granted at Barnstaple's Magistrates Court on Monday 30 May under the Anti-Social Behaviour Crime and Policing Act 2014. This means that during this period, anyone who enters the property will be committing a criminal offence.

Leader of North Devon Council, Councillor David Worden, says: “This type of intervention can only happen with the expertise and commitment of the Council and the Police. It is evidence of the strength of the partnership which works to promote community safety in North Devon. The pre-planning and collaboration with other statutory and voluntary sector organisations were critical in ensuring the welfare of the tenants."

Head of Health and Housing at North Devon Council, Jeremy Mann, says: “A closure order is a very last resort and it is not a decision we take easily. We have made a number of attempts to address the issues at the Marlborough House previously but the problems have continued and now present a real danger to peoples’ lives.

"We have been working hard to support those living at the premises and have found alternative accommodation for 10 out of the 11 residents, with the final resident being unwilling to work with us.

"We hope that this action will bring the anti-social behaviour associated with the property to an end once and for all."

Sector Inspector, Rich Preston, says: "The closure order for the Marlborough House in Ilfracombe is a significant step forward in reducing the concerns linked to the premises that have existed for a number of years.

"This necessary action should serve as a reminder to those who manage multi-occupancy premises and hotels that they have a responsibility and remain accountable for the behaviours of individuals on their premises, and that robust action will be taken in cases where those responsibilities are not met.

"This closure order is a positive step towards reducing anti-social behaviour and criminal activities in Ilfracombe and increasing the safety of residents, businesses and visitors to the area".

Those looking for advice on the issue of anti-social behaviour should visit North Devon Council's website.