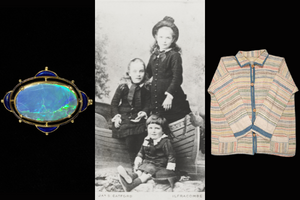 A new exhibition coming to the Museum of Barnstaple and North Devon this May will tell the little-known story of Barnstaple’s Partridge family who were influential members of the Arts and Crafts movement.

The Museum's "Partridge Fossil Collection" explores the lives and work of Ethel, Fred and Maud Partridge who were born and educated locally in the late nineteenth century and went on to become part of the artistic community of Ditchling where their circle included Bernard Leach, Shoji Hamada, Eric Gill and many more.

Ethel was a highly skilled craftswoman who led the resurgence of dyeing and hand-loom weaving in the UK, while Fred’s unique jewellery designs were sold in London’s famous Liberty and Co department store.

The exhibition brings together items from the Museum’s own Partridge Collection with loans from national and regional museums including: examples of Ethel’s celebrated handmade textiles from the V&A and Ditchling Museum; exquisite jewellery created by Fred from the V&A, British Museum and Fitzwilliam and Birmingham Museums; and a first edition copy of a book on Mediaeval Sinhalese art, including photographs and texts by Ethel, from the British Library. Extensive loans from the Crafts Study Centre include a hand woven silk jacket made by Ethel with buttons by Fred.

Museum Curator at the Museum of Barnstaple and North Devon, Alison Mills says: “The Partridge Collection is an important part of the geological collections that the Museum inherited from the North Devon Athenaeum, but it is only 10 years ago that we realised it was Ethel Partridge’s collection, that she was an important traveller, scholar and maker, and that she was the first female Royal Designer for Industry. This remarkable Barnstaple woman became the grand old lady of English dyeing and weaving. We hope her story inspires more local people to watch, learn, make and create."

Sophia Weston, Trustee of the Garfield Weston Foundation, says: “We are so pleased that the Weston Loan Programme is able to support this celebration of the Partridge family and their influence across British arts and crafts. It is wonderful to see works from a number of national collections being displayed for visitors to enjoy in Barnstaple.”

"The Partridge Fossil Collection" tells the story of the children’s lives, from their early years in Barnstaple to their later positions as important members of the Arts and Crafts movement – a status they shared with other local figures including W.R. Lethaby and the Fishley family of potters.

Ethel married the art historian, collector and polymath Ananda Coomaraswamy, having met him in North Devon when he was working as a geologist. The couple travelled to Sri Lanka and India where Ethel documented the traditional crafts and textiles she encountered. Ethel then began her own, mostly self-taught, experiments in weaving and dyeing – eventually training people herself from the studio she founded in Ditchling.

Fred became an Art Nouveau jeweller following his education at the Birmingham School of Art. He moved to Gloucestershire to work with C.R. Ashbee’s Guild and School of Handicrafts – a community of artists where Ethel also studied while married to her second husband Philip Mairet.

The exhibition gathers together a wide range of materials, including photographs, letters and examples of the Partridge’s varied work to tell the little-known story of this influential family who mixed with some of the most talented craftspeople of their era.

The exhibition is accompanied by a spring and summer events programme which includes an exclusive three-day workshop with renowned weavers Jenny Wilkinson and Angie Parker, Natural dye practitioner Sarah Burn and Radhi Parekh of Artisans Mumbai.

The Partridge Fossil Collection, 14 May – 29 October 2022 at the Museum of Barnstaple and North Devon. Entry is free of charge and information about opening times can be found at barnstaplemuseum.org.uk