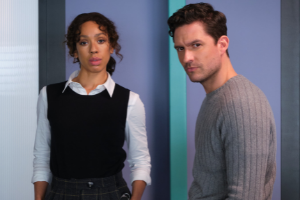 North Devon Council has been supporting the shoot by providing local knowledge and finding appropriate sites for filming and for the the film crew to base themselves.

There will be some minor disruption around North Devon during the three-week shoot, particularly around Ilfracombe but the crew will do their best to allow life to carry on as normal.

The series is inspired by the best-selling novel of the same title from award-winning writer Ann Cleeves, creator of the iconic Vera and Shetland series. Famous faces in the cast include Ben Aldridge, Juliet Stevenson, Martin Shaw, Anita Dobson, Neil Morrisey and Pearl Mackie.

Council leader Cllr David Worden says: "This is a wonderful opportunity to show North Devon off to a national audience and I'm sure we're all prepared to put up with some minor disruption to allow this exciting filming to take place. We wish the crew the best of luck with the shooting and we all look forward to watching the series when it comes out."

More information about he series is available on the ITV website.