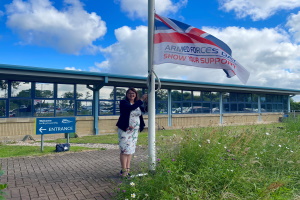 The Armed Forces flag has been raised today (Friday 25 June) in front of North Devon Council's offices at Brynsworthy, to show support and mark this year's Armed Forces Day, which falls on 26 June.

The council is among the signatories to The Armed Forces Covenant, a commitment from public and private organisations to support the active and retired Armed Forces community.

Armed Forces Week is a national event to show support for the men and women who make up the Armed Forces community, from serving troops to service families, veterans, reservists, cadets and cadet force adult volunteers.

Chairman of North Devon Council, Councillor Julie Hunt, says: “Flying the flag symbolises our support for Armed Forces Day and gives us an opportunity to show thanks in recognition of the sacrifices made by members of our armed forces, whether past or presently serving.

North Devon has a proud history of military connections, with the Royal Marine base at Chivenor, and the legacy of World War II can be found all over our landscape in the remains of coastal defences, radar stations and D-Day practice grounds.”

The flag raising ceremony was carried out in line with the latest Covid-safety guidelines.

Residents wishing to pay their own tributes are encouraged to visit armedforcesday.org.uk/get-involved.