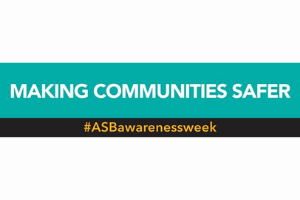 North Devon Council has joined a national campaign that is bringing together people and organisations from across the country to take a stand against antisocial behaviour and make communities safer.

The council is working with partner organisations to tackle antisocial behaviour (ASB) such as street drinking and littering. Officers are carrying out joint patrols together with Devon and Cornwall Police in Barnstaple and Ilfracombe and visiting businesses in the towns to mark the UK’s first official ASB Awareness Week.

Running this week until Sunday 25 July, ASB Awareness Week – Making Communities Safer aims to encourage communities to take a stand against ASB and highlight the options available to those facing it.

The week of action is bringing together people and organisations from across the country to take a stand and work together to make communities safer.

Council officers are this week carrying out visual patrols throughout northern Devon town centres, in conjunction with police officers and council officers from neighbouring district Torridge. The aim of the patrols is to engage with the community, as well as addressing environmental antisocial behaviour, such as littering and dog fouling. Officers will also be visiting licensed premises where noise and associated antisocial behaviour is a problem to find solutions through support and advice.

The patrols carried out during ASB Awareness week will reinforce the work being doing on an ongoing basis by the council to enforce the Public Spaces Protection Order (PSPO) for antisocial behaviour, which is already in place in Barnstaple and Ilfracombe town centres.

Lead Member for Climate Change at North Devon Council, Councillor Caroline Leaver says: "Antisocial behaviour of any kind is unacceptable and can have a really damaging impact on people's lives. Campaigns such as this one are a great way of highlighting the work we do with partner organisations to tackle some of these negative behaviours taking place in our district.”

Rebecca Bryant OBE, chief executive of Resolve, said: “We need to change the way we think about ASB. It is not low-level crime. It devastates the lives of victims and communities and can be a precursor to more serious crime.

“As the nation begins to recover from the impact of the pandemic and our society and economy celebrates the start of return to normal life, it is important that the challenge of ASB continues to be given the priority it needs nationally and locally so that people feel safe in their homes and communities.

“We are delighted to have North Devon Council involved in this hugely important and successful campaign. It is vital to develop partnership approaches across communities to deal with the growing challenges around ASB. Everyone has the right to feel safe in their home and community.”

As a further measure to support the fight against ASB, North Devon Council has also employed Street Marshals to patrol the town centres during what is likely to be a very busy summer. The roles were made possible thanks to thanks to Police and Crime Commissioner funding, match funded by HM Government's Welcome Back Fund. The marshals will be working with council representatives as well as the police, town councils and town centre management to target any specific areas of concern and help ensure our towns remain safe and welcoming places.

For more information about ASB Awareness Week visit www.resolveuk.org.uk/asbawarenessweek. Any reports concerning environmental ASB should be made to the council's customer services team on 01271 388870 while reports of general antisocial behaviour should be made to Devon and Cornwall Police.