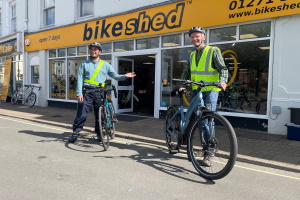 A Chulmleigh man has won an electric bike after entering a competition during a recent “Lifestyle Spring Clean Week”.

Grant Sherman recently picked up his new wheels from The Bike Shed in Barnstaple after he was entered into a prize draw for taking part in an online lifestyle survey during the event which took place between 12-21 March.

The environmentally focused week was a joint project between North Devon Council, Torridge Council, South Hams Council, West Devon Council and local environmental charities including Carbon Savvy who hosted the survey and donated towards the prize alongside The Bike Shed.

The week encouraged residents and organisations to take actions that both increase quality of life and reduce their carbon footprint.

Grant only recently learnt how to ride a bike, aged 52, due to having more time over lockdown. Both Grant and his wife lived without a car during the 13 years they spent on Lundy and have decided to continue living without one now they are back on the mainland. They are looking forward to using the e-bike as a way of getting around and to help keep their carbon footprints low.

Founder of Carbon Savvy, Mukti Mitchell, says: “We couldn't believe it when we found out that Grant has only just learned to ride a bike, doesn't own a car, and to top it off, his website is about supporting green businesses in Devon.  There couldn’t be a more deserving winner for this prize.”

Winner of the e-bike, Grant Sherman says: "When I was a child, I always thought cycling was too much effort, especially the hills of Ilfracombe where I grew up!  But my step daughter Rachel set me a lockdown challenge to learn to ride for my 52nd birthday, and even loaned me a spare bike. I am so pleased to have won a bike of my own"

North Devon Council Chief Executive Ken Miles, says: “I couldn't think of anyone more suitable to win the grand prize in a low carbon footprint competition than Grant. The fact that he has only just learned to ride a bike and the conscious decision he and his wife have made to live without a car makes him a very deserving winner and we wish him well in his continued efforts to fight climate change in Devon.”

Across Devon the event reached over 100,000 people with its message of simple, easy things you can do to reduce CO2 levels in ordinary life.