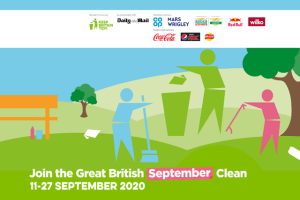 North Devon's residents and community groups are being called on to help clean up the district, as Keep Britain Tidy’s nationwide annual litter picking campaign returns.

The Great British Spring Clean was originally due to start in March but was postponed as a result of the Covid-19 pandemic. With more than 680,000 volunteers eager to help clean up streets, parks and beaches across the country, Keep Britain Tidy rescheduled the event. The litter picking campaign, renamed the Great British September Clean, will now take place between 11-27 September.

North Devon Council is backing the Great British September Clean, encouraging its residents to organise a private group clean-up or pledge to do their own individual litter pick. The council can help by providing litter picking equipment and will pick up litter collected during a clean-up event by prior arrangement.

The national event coincides with the council's ongoing 'Clear Messages' campaign, which aims to combat environmental offences such as littering and asks the North Devon community to share information about litterers in order to 'Challenge it, report it, change it'.

Lead Member for Environment at North Devon Council, Councillor Netti Pearson, says: “I'm thrilled that we are involved with the Great British clean-up again this year, particularly after it had to be postponed during lockdown.

“As a council, we are committed to tackling pollution and littering in the district for the good of our residents and the environment. The Great British September Clean is the ideal opportunity to reiterate the important messages we share through our 'Clear Messages' campaign; we need our residents to help us fight littering and participating in a clean-up is a great way to start.

"Last year it was amazing to see the community come together and join in with the national clean-up; this year will be slightly different as we expect people to follow the government’s social distancing guidelines, but we hope to see just as much enthusiasm from our residents and community groups as usual.”

Residents who wish to organise a private group clean-up with up to five family and friends or pledge to do their own individual litter-pick should visit Keep Britain Tidy's website www.keepbritaintidy.org. Residents are also being asked to make some noise about the campaign on their social media accounts by using the hashtag #GBSeptemberClean.

Environmental offences such as flytipping or littering can be reported to the council online at www.northdevon.gov.uk/environment or by calling 01271 388870. Residents or groups who wish to borrow equipment or arrange for a collection of litter should contact the council by email to pete.sheppard@northdevon.gov.uk or phone the Customer Services team on 01271 374776.